The 2017 admissions report confirms Sciences Po's increasing attractiveness, with a total of 16,976 applications received this year at the undergraduate and graduate levels. The rise in international applications at both levels has accentuated this increase. In particular, applications to Master's programmes increased by nearly 6% in one year, attesting to the appeal of our seven graduate schools. A stable selection rate and the diversity of applicants guarantee the excellence of the education we deliver. Total student numbers are practically stable this year.

Sciences Po’s appeal is as strong as ever among high school students, 9,658 of whom applied to the Undergraduate College (not counting those applying to the dual degree programmes with Parisian universities). There were 9,318 applicants last year—a 3.6% increase in one year.

This year, the entrance examination attracted 5,480 candidates, a relatively stable number compared to last year (5,528 in 2016). 3,177 candidates applied through the international procedure or to one of the international dual degree programmes—an increase of 11 percent in one year (2,853 in 2016). The number of candidates applying through the Equal Opportunity programme also rose by almost 7%; 1,001 high school students took part in the Sciences Po workshops at their school and 791 completed their applications for eligibility (937 and 774 respectively in 2016).

All procedures combined, 1,848 students were admitted—a stable selection rate compared to the previous year (1,816 admitted in 2016). They come from 992 high schools in France and around the world. In France, more students come from outside the Paris region (60% of admitted students) than from within it. 64% of new undergraduate students are attending a regional campus.

Five one-year Master’s programmes designed for young professionals and graduates were launched in 2015. They are taught entirely in English at the Paris School of International Affairs, the School of Public Affairs, the Law School and the School of Management and Innovation. In 2017, 361 candidates applied and 182 were admitted. This represents an increase of nearly 40 percent compared to 2016 (258 candidates for 131 admitted).

1,769 students have been admitted through the Equal Opportunity programme since it began in 2001, positioning Sciences Po as a key player in social diversity among higher education institutions.

Sciences Po is a selective research university of international standing based on the values of openness and excellence. Sciences Po's unique academic model combines expertise in human and social sciences, multidisciplinarity and a professional grounding to educate professionals and citizens able to understand and transform society. Diversity is a key element of Sciences Po's identity. The student body comprises 47 percent international students from more than 150 different countries and 27 percent scholarship students (up from 6 percent in 2000). 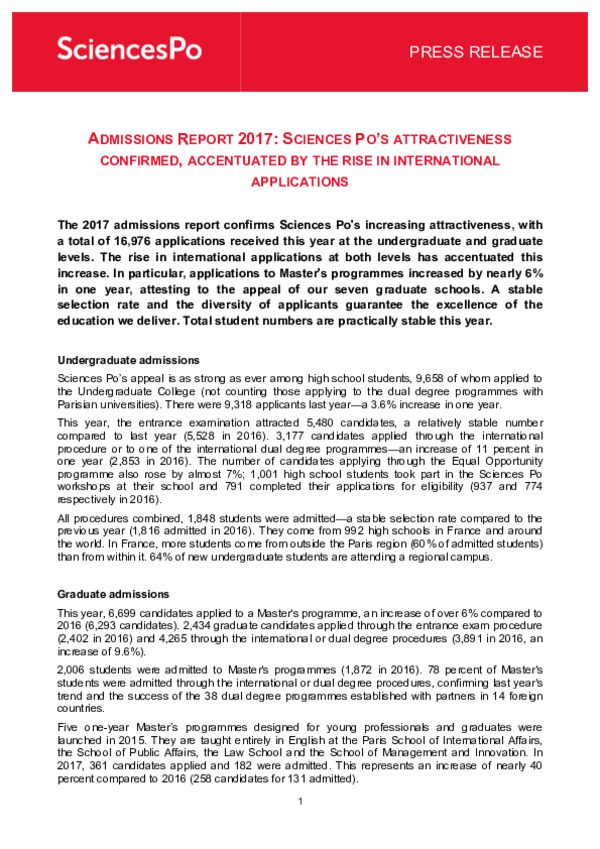