CIVICA has been selected by the European Commission as one of the pilot European Universities. A total of 48 applications were received, of which 17 have been selected and awarded funding, as announced on June 26 by the Commission. The application of CIVICA received 92/100 points.

An ambitious array of activities at all levels (BA, MA and PhD) will be implemented, as well as a particular focus during the pilot phase on four key challenges: Challenges to Democracy in the XXIst Century; Societies in Transition and Crises of Earth; Europe Revisited; and Data Driven Technologies for the Social Sciences.

CIVICA will connect 38,000 students coming from across Europe and from all over the world to a community of 7,000 faculty members and some 3,000 administrative staff. CIVICA will unite leading European higher education institutions in the social sciences, the humanities, business management and public policy to create a broad European inter-university campus that links teaching and learning, research and innovation, and mobilise society at large across cultural, linguistic, and national borders.


Mario Monti (Bocconi University): “The funded pilots promise to pioneer brand-new ways of cooperating throughout Europe. Bocconi is proud to be part of CIVICA, a truly pan-European endeavour that recognizes the centrality of social sciences for Europe’s future.”

Michael Ignatieff (Central European University): “CEU believes passionately that knowledge is borderless. The important connections that we build and maintain with our CIVICA partners will ensure -- through European-wide teaching, learning and research -- that knowledge will continue to transcend borders, wherever they may lie.”

Renaud Dehousse (European University Institute): "The social responsibility of leading European institutions of social sciences and humanities is to train the next generation of Europeans to make them able to understand and influence an increasingly complex world, and to create a European critical mass to advise policy-makers on the great challenges faced by societies."

Henrik Enderlein (Hertie School of Governance): “Fifteen years after the Hertie School was founded, it is a milestone in our School’s history to pioneer the European Universities initiative as part of CIVICA. We are proud to be part of this European network which reflects the Hertie School’s own mission: To combine our excellence in teaching, research and outreach in order to prepare the next generation of policymakers to actively engage for the common good in Europe.”

Remus Pricopie (National University of Political Studies and Public Administration): “As the Romanian School of Governance, SNSPA is honoured to be part of the winning European University Alliance, CIVICA.  These seven universities will be the ‘drivers of change’, creating the strongest social sciences networking universities in Europe. We are glad that the academic communities of these universities will be united, bringing common objectives, facing similar sets of challenges, making together a further step for education, research, and innovation.”

Frédéric Mion (Sciences Po): “As we look towards celebrating the 150th anniversary of Sciences Po in 2022, I am delighted to be working with some of our closest long-term partners as we launch CIVICA, a historical and pioneering endeavour that truly reflects our university’s European trajectory and our international ambitions for the role of the social sciences in today’s world.”

Lars Strannegård (Stockholm School of Economics): “We at the Stockholm School of Economics are delighted to be part of the creation of a strong European academic alliance. This is an important step in our strategy for internationalization as well as for our mission to strengthen the social sciences in business education. CIVICA will bring many opportunities to our students, researchers and partners and will also put an important emphasis on the global and regional challenges we are coming together to address.”

Minouche Shafik (London School of Economics and Political Science, Associated partner):
“From combatting climate change to treating global disease and tackling inequality, the social sciences are vital for our wellbeing and prosperity.  LSE is looking forward to working closely with CIVICA to enhance the impact of the social sciences and humanities and help demonstrate their enormous value to the world.”

Congratulating all applicants to the competition, CIVICA looks forward to working alongside other pilot projects to tackle the biggest issues facing society and, in doing so, contribute to the international competitiveness of European universities. 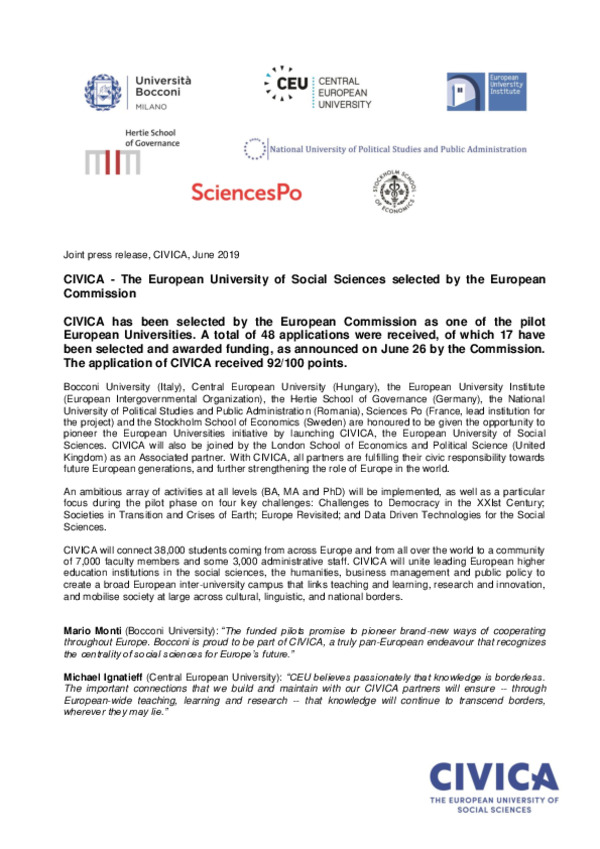 Being European: The need for higher education leadershipSCIENCES PO PREPARES FOR AN UNPRECEDENTED AND INNOVATIVE START TO THE ACADEMIC YEAR    NATACHA VALLA APPOINTED DEAN OF THE SCHOOL OF MANAGEMENT AND INNOVATION AT SCIENCES QS WORLD UNIVERSITY RANKING 2020 : SCIENCES PO RANKS 2nd FOR “POLITICAL SCIENCE AND INTERNATIONAL STUDIES”  Admissions 2019: A New Record in Applications
Download

IN THE SAME CATEGORY

Being European: The need for higher education leadership

Sciences Po IN THE NEWS