Fitch affirmed Sciences Po’s A + rating and “stable” outlook today, bearing witness once again to the institution’s attractiveness and to the sustainable financial model that enabled the acquisition of the Hôtel de l’Artillerie in 2016 and plans for its development.

This rating and the maintenance of the stable outlook are a sign of “the institution’s academic excellence, both nationally and internationally, and its special position in the French academic landscape which attracts sustained student demand.” It is also the result of a change in the rating method for public sector entities last year, a method that now takes account of Sciences Po’s specific status.

Fitch’s assessment also reflects Sciences Po’s strong financial performance and the growth of its own funds and income sources (up 8.3% on average each year since 2010), while direct government funding (including local authorities for the campuses in the regions and the Paris City Council) has been consolidated. In 2016, Sciences Po’s own income sources accounted for 57.8% of its budget, or 55% if staff salaries coming directly from the Ministry of Higher Education and Research and CNRS, and which do not directly support the FNSP budget, are counted in Sciences Po’s funds.

The institution’s own funds increased by 7.8% in 2016 to €101 million. More specifically, Sciences Po demonstrated its growing ability to attract national and European research funding (up 5.3%), strengthened its presence on the continuing education market (sales up 15.7%), and convinced an even wider community of sponsors to support its projects (corporate sponsorship increased by 6.4% and private sponsorship by 30%).

Fitch confirms the strategic benefit of acquiring the Hôtel de l’Artillerie, which will allow Sciences Po to further streamline its Paris campus by ending 16 leases and consolidating its place among the leading universities in the humanities and social sciences. Fitch’s rating and outlook also take into account the figures presented in the funding plan for the Artillerie campus development.

According to Frédéric Mion, president of Sciences Po, “with this rating, Fitch acknowledges the value of our educational and institutional approach and our sound financial management. This confirms once again the sustainability of the Campus 2022 plan based on our renewed business model. Fitch is also well aware of our government funding and the financial security offered by the Paris City Council.” 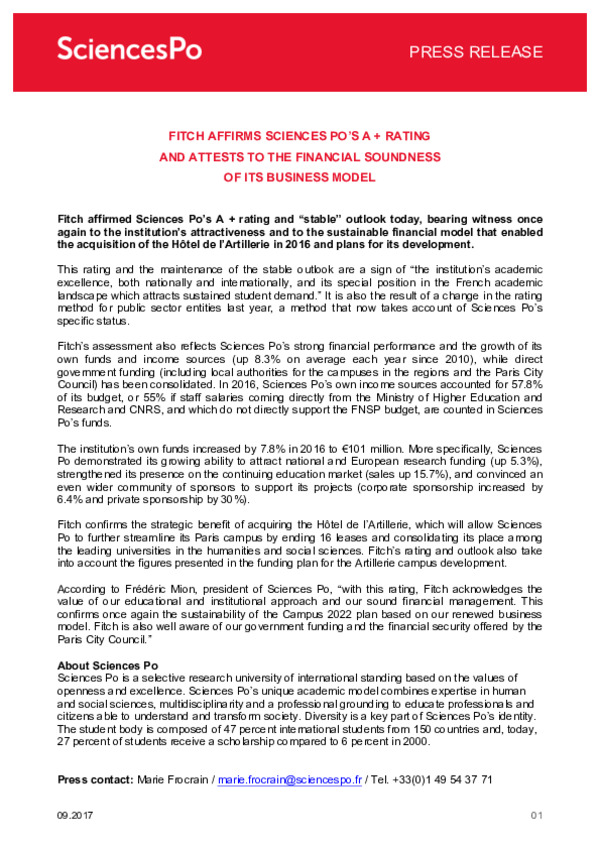