GENDER-BASED AND SEXUAL VIOLENCE: Sciences Po reports on the recommendations of its working group

10/05/2021 | 12:00 Press Releases
Bénédicte Durand, Acting President of Sciences Po, today received the conclusions of the working group on gender-based and sexual violence (GBV), set up at her initiative on 17 February 2021. The report reviews the information collated  by the working group to put forward a set of recommendations - in accordance with the objective that it was set - for strengthening and fostering a culture of respect, civility and equality at Sciences Po.

For two months, the working group, chaired by Danièle Hervieu-Léger, conducted an independent review with the objective of proposing an ambitious plan to meet the high expectations articulated by the various Sciences Po communities on the issue of gender-based and sexual violence.

In terms of identifying and preventing risk situations through training and research, the working group recommends, in particular: In terms of psychological support provisions for victims of gender-based and sexual violence: although the feedback received on the Helpline Unit from those who have had recourse to it mostly emphasises satisfaction concerning the quality of the support and respect of the rules governing care and confidentiality, the Unit is only used by the student population and for incidents that have occurred beyond the institution’s walls. In particular, the working group recommends: With regard to disciplinary procedures, the working group recommends, inter alia:
“I would like to salute the very high quality of the work carried out by the sociologist Danièle Hervieu-Léger, Chair of the working group, and all its members. This set of 61 measures forms a system and signals a renewed commitment by our institution, which should lead to a lasting awareness among all of our communities about the issue of gender-based and sexual violence. First of all, the measures must enable us collectively, through training and research, to better identify the cluster of behaviours and warning signs, and to propose a better identified and more effective response and support system, and to formalise more solid disciplinary procedures. Under our supervision, we will propose an approach and a timetable for implementation before the end of the academic year”, said Bénédicte Durand, Acting President of Sciences Po.

“The group I chaired worked in a collaborative, open and calm manner on a delicate and particularly sensitive subject within the student and university communities. We would like to thank all the people we spoke to who helped us to develop considered and tangible responses. We have confidence in the capacity of the Sciences Po teams to implement them”, said Danièle Hervieu-Léger, sociologist and Chair of the working group.


About Sciences Po
Sciences Po is a selective research university of international standing based on the values of openness and excellence. Sciences Po's unique academic model combines expertise in human and social sciences, multidisciplinarity and a professional grounding to educate professionals and citizens able to understand and transform society. Diversity is a key element of Sciences Po's identity. The student body comprises 47 percent international students from 150 different countries and 26 percent scholarship students (up from 6 percent in 2000). 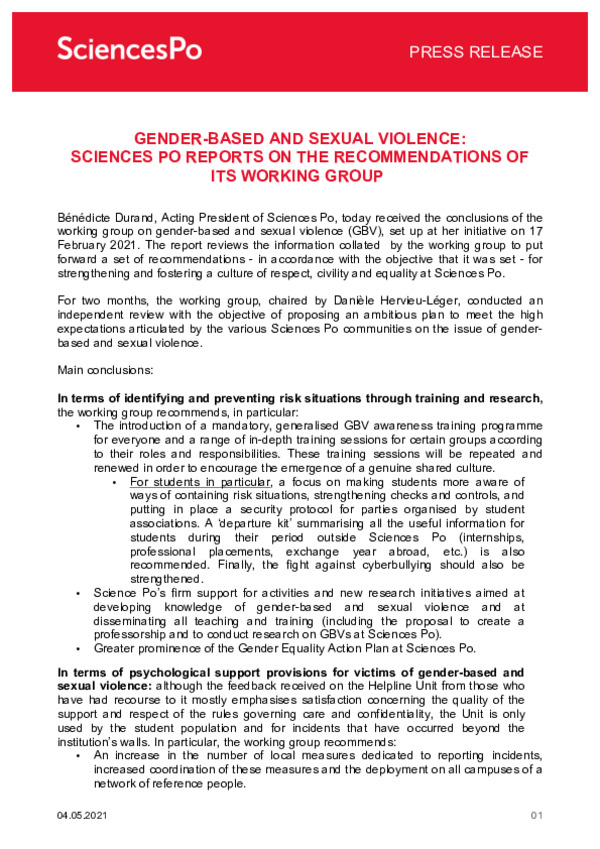