The launch of “Sciences Po 2022”, a fundraising campaign under the leadership of Alexandre Bompard (CEO of Carrefour and Sciences Po graduate from the Class of 1994) is the largest in the history of Sciences Po. Directed at individuals and companies both in France and internationally, the campaign aims to assist Sciences Po in its ambition to reinvent itself for future generations. The campaign will run until 2022, coinciding with Sciences Po’s 150th anniversary and the inauguration of the new Parisian campus at the historic site of the Hôtel de l’Artillerie.

Paris, 8 October 2018: at its annual Gala Dinner, Sciences Po announced its ambition of raising 100 million euros between now and 2022, the greatest fundraising campaign in the university’s history. A first phase has already drawn 47 million euros from businesses and donors since 2015 (39 million collected and 8 million pledged). The Sciences Po 2022 campaign will come to a close at the end of four years, in time for the inauguration of the Artillerie site and Sciences Po’s 150th anniversary.

Funds collected through the campaign will enable Sciences Po to project itself into a new 150-year plan, founded on its belief in excellence and innovation, and aiming to affirm its status as one of the finest universities worldwide in the field of the social sciences. As such, the project is faithful to the principles articulated by Sciences Po’s founder Émile Boutmy, who pledged that the school would “shape free minds, capable of understanding the world in order to transform it”.

A bid to transform the face of Sciences Po

The Sciences Po 2022 campaign, or the 150th Anniversary Campaign, will finance a huge number of projects organised around five strategic axes:

A long tradition of sponsorship

In making this fundraising bid, Sciences Po is building on a long tradition of sponsorship. It was ultimately thanks to the contributions of a circle of patrons and funders that Émile Boutmy was able to found in 1872 l’École libre des sciences politiques, which would become Sciences Po. It was with the help of a donation from the Duchess of Galliera that the university purchased its first building located at 27 rue Saint-Guillaume, in 1879.

Sciences Po began forging partnerships and actively fundraising in the 2000s, establishing networks with both Great Britain and the United States. Over the period from 2008-2013, the university’s first fundraising campaign drew 40 million euros, of which 10 million came from international donations.

Sciences Po relies on the development of its personal resources: today, public donations represent 37% of the institution’s funds. Sponsorship plays an essential role in assisting the university to fund its projects and strategies; in 2018, 9% of its budget was contributed by sponsors. The Sciences Po 2022 campaign is thus a further diversification of the institution’s economic model, which will allow Sciences Po to reaffirm the support of its existing sponsors, while extending its network still further, particularly towards individual donors.

Supporters of this exceptional fundraising bid will be invited to play an active part within the Sciences Po 2022 project: as well as the naming of spaces on the Artillerie site, they will have the opportunity to be involved in key moments of academic and student life, and to share their experiences with a new generation.

“Sciences Po 2022 is a project of reinvention that culminates 150 years of excellence, and lays the groundwork for an ever more open, international and innovative university. We must keep up with a world in rapid transformation, in order to shape the leaders of tomorrow. Our ambition is to embody a unique form of excellence and responsibility, within a globalised hub of higher education and research.”

“I am proud and honoured to accompany Sciences Po in its 150th Anniversary Campaign. I chose to commit my support to this institution, which is dear to me, because I am convinced that this transformation project led by Frédéric Mion will place Sciences Po at the heart of tomorrow’s world and position it as a global leader in higher education.”

“I graduated from Sciences Po in 1984 and then moved to London for work. My diploma was an undeniable advantage and greatly facilitated my entry onto the job market. So it feels right today to give back by supporting these projects and helping foster recognition for Sciences Po’s spectacular openness to new disciplines and its international student body. I am proving my commitment by assuming the role of campaign ambassador in the United Kingdom as of 2018. I believe that we, as alumni living abroad, have a duty to support our alma mater and make the excellence of our education widely known!” 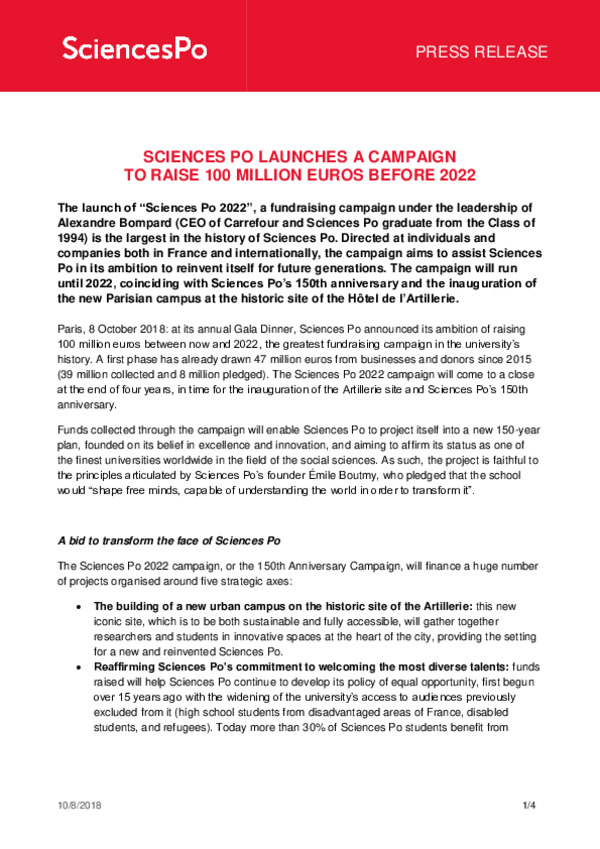