Paris, September 14th 2022 - As Sciences Po celebrates its 150th Anniversary, the institution will host on its campus in Paris the Academic Freedom Week from Wednesday 14th of September to Friday 16th of September.

As initiated by Mathias Vicherat, Director of Sciences Po, the Academic Freedom Week gathers university researchers in the fields of social sciences and humanities, as well as members of international partner universities of Sciences Po. They will both work and reflect on the many pressures that weigh today on universities and research all over the world.

Sciences Po, as the historic French university for social sciences and humanities, today the most international in the world (50% of foreign students, 150 nationalities represented) and a founding member of “CIVICA - the European university of social sciences”, is more than ever a fierce advocate of the freedom to teach, to conduct research, to share results, whatever the subject or the field may be, as long as it respects scientific integrity and an evaluation by peers.

Those days of sharing and thinking will also allow the academic community to reaffirm its support to Fariba Adelkhah, a Franco-Iranian anthropologist and Research Director at the Center for International Studies (CERI) of Sciences Po, imprisoned in Iran since June 5th, 2019.

At the end of this Academic Freedom Week, a set of tangible recommendations will be published and promoted by all the present institutions in order to defend and promote academic freedom in the world.

A total of four roundtables are scheduled:

Founded around values of openness and excellence, Sciences Po is a selective research university of international standing whose unique model associates a specialization in social sciences and humanities and  a multidisciplinarity and a professional anchoring to train actors that can understand and transform society. 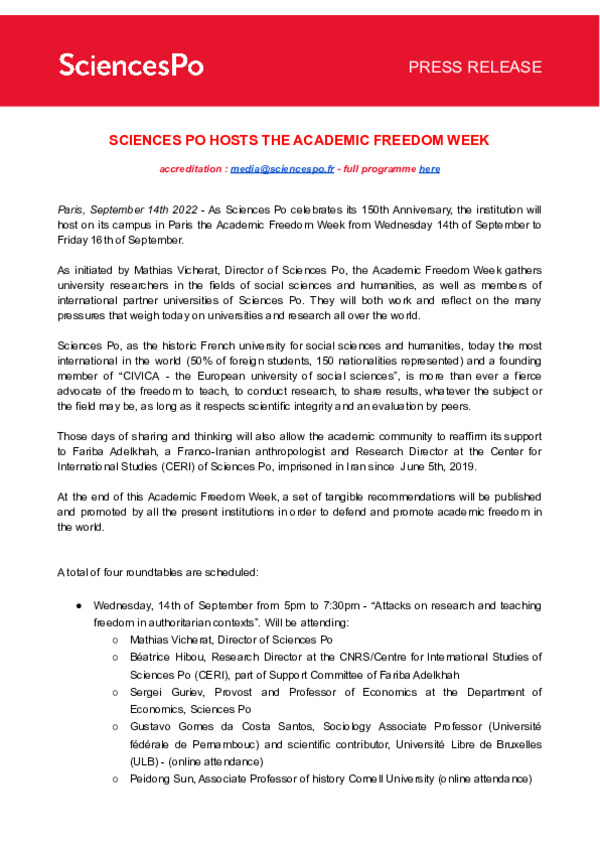