EVANSTON, Ill. — Intergenerational justice will be the key theme driving the dialogue among more than two-dozen university presidents who will gather virtually Nov. 22-24 for the U7+ Alliance of World Universities Presidential Summit, hosted by Northwestern University.

The U7+ Summit is the annual meeting of the U7+ Alliance, the first coalition of university presidents from Europe, Asia, North America, South America, Africa and Australia dedicated to defining concrete actions universities can take to collectively address global challenges in coordination with government leaders in G7 countries and beyond.

“As educators of millions of young people around the world, universities have a responsibility to foster intergenerational justice — to put the interests and rights of youth and future generations at the center of efforts to address the global challenges they will inherit,” said Northwestern University President Morton Schapiro. “We are honored to host this important convening of university leaders committed to that endeavor.”

Northwestern University will host the summit in partnership with Columbia University, Georgetown University and the University of California, Berkeley. This marks the first time a U.S. institution will host the U7+ Alliance, which French President Emmanuel Macron helped launch last year at Sciences Po.

Topics on this year’s summit agenda include the U7+ Alliance’s engagement with the G7, ethical applications of artificial intelligence and paths to sparking intergenerational dialogue on global issues. The Summit will include youth voices from around the world and culminate in new and renewed commitments to fostering educational and economic opportunity for the next generation.
“More than ever, in this year of unprecedented global crisis, it is crucial to recall universities' responsibility and their role in rising to the world's great challenges, within the framework of our values. The fight against inequalities and the polarization of our societies, the impact of technological innovation and civic engagement from the local to the global level are at the heart of universities' civic action and their impact. On behalf of all, I would like to thank our American colleagues for having successfully achieved the feat of organising this summit in 2020, from the United States, in order to pursue and implement our global commitments,” said Sciences Po President Frédéric Mion, chairman of the U7+ executive committee.

The 2020 Summit agenda was influenced in part by the first U7+ Worldwide Student Forum, where university students in countries including Ghana, Morocco, Canada, the U.S., UK, Italy, France, Germany, India, Singapore, Korea and Japan set forth their recommendations for how universities can best prepare them for active engagement in efforts to address pressing global challenges including climate change, inequality and injustice in its many forms.

“Students played a central role in this year’s summit agenda-setting process and will catalyze our summit discussions as the global COVID-19 pandemic disproportionately impacts the hopes and futures of young people worldwide,” said Northwestern University Associate Provost for Global Affairs, Annelise Riles. “We are committed as an Alliance of universities to collective action on behalf of the young people we serve as well as future generations that will grapple with increasingly complex and pressing global challenges.”

Following their first gathering in 2019, U7+ universities set targets for collectively reducing their own greenhouse gas emissions, identified best practices for less carbon intensive globalization, began requiring courses on climate, biodiversity and sustainability for students across all areas of study, and established guidelines for the ethical use of artificial intelligence and digital technology.
Members of the media and broader public are invited to the Summit’s main plenary session on Tuesday, Nov. 24 at 8:30 a.m. C.S.T. (UTC-6) where the presidents of Northwestern, Columbia, Georgetown, the University of California, Berkeley and Sciences Po will share their views on how universities should engage with the G7 and other multilateral organizations to tackle global challenges. The plenary also will feature a performance by student a cappella group Purple Haze. Media and members of the public can tune in to a livestream of the plenary session here.

About Northwestern University
Founded in 1851, Northwestern University is ranked among the top ten universities in the United States, with a population of more than 8,000 undergraduate students and 13,000 graduate students from more than 75 countries. Northwestern is home to more than 50 research centers across three campuses—in Chicago and Evanston, Illinois and Doha, Qatar—along with sites in San Francisco, New York City, Washington DC and Miami. Northwestern also has forged partnerships with more than 100 world-class academic institutions across more than 35 countries and is committed to fostering an innovative, interdisciplinary community and delivering an impact that is rare in higher education.

About the U7+ Alliance

The U7+ Alliance is the first international coalition of university presidents aimed at structuring and advancing the role of universities as global actors across the multilateral agenda. Alliance members meet annually to establish a common agenda and identify key areas for coordinated action. Together, U7+ university presidents take stock of their universities’ unique civic and social responsibilities and pledge concrete action on behalf of their institutions to address the world’s most pressing challenges at local, regional and global levels. 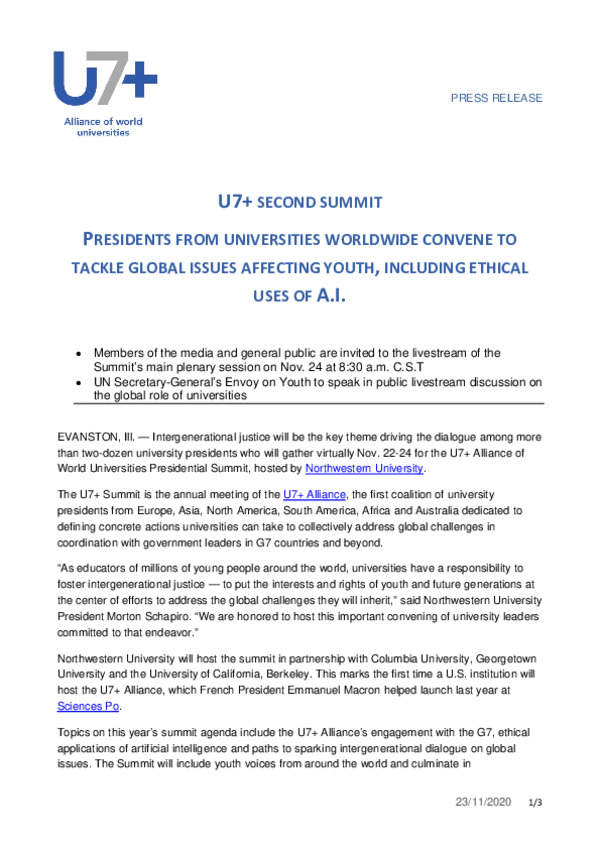 U7+: Universities worldwide call on government leaders to think beyond...