COMMISSION ON THE FIGHT AGAINST GENDER-BASED AND SEXUAL VIOLENCE

18/03/2021 | 12:00 Press Releases
On 17 February, Sciences Po's Acting President Bénédicte Durand announced the creation of a commission focusing on the fight against gender-based and sexual violence in our institution. The commission is chaired by sociologist Danièle Hervieu-Léger and consists of twenty members, including representatives of the student, faculty and employee communities.

The mission of this commission is to develop all recommendations necessary to strengthen or transform the mechanisms for dealing with sexual and gender-based violence and situations of domination within the various Sciences Po communities.

The commission will submit its conclusions in early May 2021, after two months of work. It should rapidly produce "concrete and enforceable proposals, and not simply general ideas on the topic", according to its President Danièle Hervieu-Léger. This is in accordance with the determination of Sciences Po to bring a clear and firm answer to this major issue.

The commission's work will focus on three aspects:
- An audit of the Helpline and monitoring unit created by the institution in 2015, the central response mechanism for situations of violence. The aim is to propose improvements in the support of survivors and the use of sanctions.
- A broader examination of all risk situations, which are numerous and diverse in the university ecosystem: within the student community, notably through festive sociability, in the relationship between students and professors, and finally in the hierarchical relations among the institution's staff.
- The notion of gender equality and the way in which teaching and research can contribute to changing mentalities and thus play a role in preventing sexist and sexual violence.

The commission’s work is organized around weekly plenary sessions and hearings open to all members of the commission.Their work will be inspired by the best practices of universities in France and abroad, and rely on the student association network.

About Danièle Hervieu-Léger
Sociologist Danièle Hervieu-Léger is a graduate of Sciences Po and of the faculty of Law (Paris-Assas). She holds a doctorate in sociology from EHESS and in literature and humanities from the University Paris-Descartes. She began her career at the Sociology of Religion Group of the National Center for Scientific Research (CNRS), as research fellow and then as Director from 1974 to 1992.
Emeritus Professor (Director of Studies) of the École des hautes études en sciences sociales (EHESS), she directed the Centre d'études interdisciplinaires des faits religieux from 1993 to 2004, before becoming its President from 2004 to 2009. She was awarded the CNRS silver medal. A specialist in the sociology of religion, Danièle Hervieu-Léger has devoted most of her research to the sociological description and theoretical interpretation of religious modernity in Christianity. Among her works: Le temps des moines ; clôture et hospitalité (PUF, 2017) - Le pèlerin et le converti : la religion en mouvement (Flammarion, 2001).

About Sciences Po
Founded on values of openness and excellence, Sciences Po is an international research university, both selective and open to the world, ranking among the finest institutions in the fields of humanities and social sciences. Its unique model combines a multidisciplinary outlook with a focus on professional application, in order to train leaders capable of understanding and transforming society. Sciences Po ranks second worldwide in the field of Social Sciences and International Relations (QS 2020). Diversity is an integral element of Sciences Po’s identity, with international students from over 150 countries making up 47% of the student body, and 26% of students receiving scholarships (compared to 6% en 2000). http://www.sciencespo.fr/en 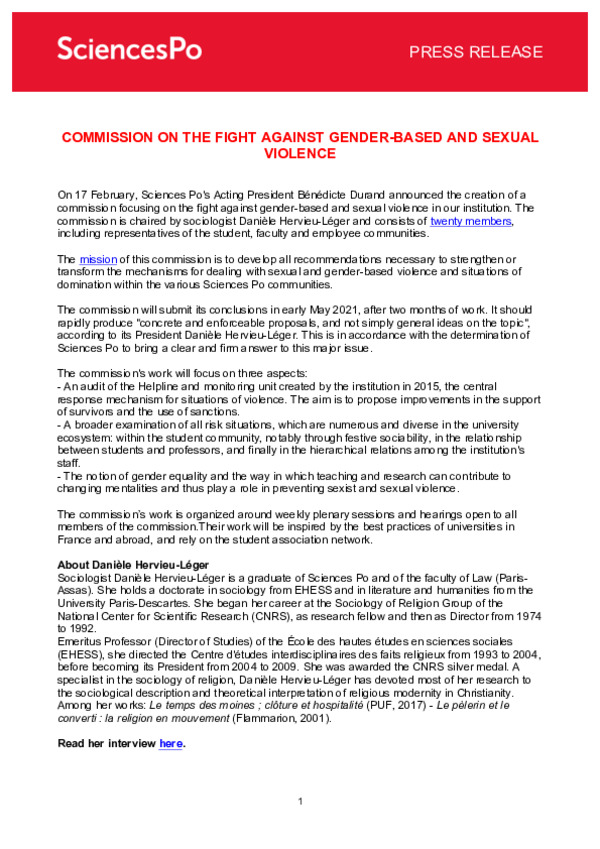